To help us to reflect on how different struggles have laid the basis for us to discuss the strategic choices available for those fighting for freedom today.

Many activists today are critical of capitalism. They are critical of how capitalism is driven by greed and an insatiable appetite for profits. They are angered at how capitalism allows for massive accumulation of wealth by a few, while the majority live in dire poverty. They are enraged by how the capitalist machine has widened inequality and how technological advancements made under capitalism are used by powerful states and corporates to subject people and movements to surveillance and to shrink organizing space for those who are challenging the system. Activists across the world are furious at the high and growing levels of violence, aggression and the destruction of the environment as well as how these challenges affect different people according to their race, class, gender, sexuality as well as geographic location. Many activists are convinced that there are possibilities for a different world and that greater freedom lies in a world beyond capitalism. Although there is agreement that we must build a future that transcends capitalism, there are heated debates on how we get there.

Some believe that any attempts to win freedom must be state-oriented because the state is the immediate source of “real power” and that any attempt to ignore its political centrality is bound to cause strategic problems. In the words of a famous dictum – “if you don’t take power, power will take you.” Others believe that popular uprisings from below present serious possibilities for challenging authoritarian regimes and bringing old dictatorships to their knees. Organising at village, town, city and neighbourhood levels has been exalted by many as the most strategic approach to challenging capitalism, while others stress the need for our organising ethic to closely mirror the society that we want to create. What is known as “prefigurative politics” argues for a close relationship between the means we use to fight and the future we want to see and live in. It is also about building alternative institutions of popular power and expression, like workers’ councils, cooperatives, people’s assemblies etc.

These debates over political strategy raise important questions and have serious implications for how we organise to free ourselves from the miseries of capitalism.

Can we organise for freedom outside and beyond the state? What does this mean in practical terms? How do local and autonomous efforts to organise everyday life interact with the power of the nation state and the power of transnational capital?

How do we win freedom today? As one activist said:

“this question seems worthwhile asking only when it leads to an enumeration of possible options, and not when it lures one into the mirage of one single great strategic idea”

These “possible options” can be summarised into 4 Freedom Routes

This route is about conquering state power through contesting and winning elections or through revolution. It is about using the state in order to consolidate what has been won and to change oppressive social relations. This is an institutional route to power, that emphasizes how the state can be used to transform society. According to its proponents, occupying state power allows us to change the rules of the game to make way for more popular participation, to change how capital conducts itself as well as to push back against powerful international institutions and states. This perspective is about winning state power in order to transform the state and transform society.

Alex Callinicos, “Can we change the world without taking power?” (a debate between John Holloway and Alex Callinicos at the World Social Forum), International Socialist Journal, Issue 106, 5 April 2005.

This route is about the meaning of popular uprisings and revolutions in the 21st century. These are moments when hundreds of thousands of people flood the streets – demanding freedom, democratic governance, social justice and human dignity for all. What does a popular uprising or a revolution look like in the 21st century? How do we understand the uprisings of the Arab Spring in 2011, Senegal in 2012, Burkina Faso in 2014, Burundi in 2015 and Togo in 2017? Do these uprisings present possibilities for challenging authoritarian regimes? How does this popular power interact with institutions of the old regime – the political and economic elites, the armed forces and the judiciary? By unseating longstanding dictators and inaugurating transitional governments, transfers of power and elections, do popular uprisings present possibilities for freedom and change?

This route has two tributaries. The first tributary is about waging autonomous struggles outside the state and building capacities to expand autonomy in everyday life. It is about building real alternatives that impose limits on how capitalism organises our lives. Some liken this route to building within the cracks or interstices of the system. These alternatives can pose a counterweight to the state and allow us to avoid being co-opted by the state and being “sucked in” by its logic of power.

The second tributary is about doing politics outside of the framework of the nation-state by focusing on the local state with a decentralised vision that is rooted in citizens and local communities. It involves contesting local elections as a way of creating and enacting the society we want and using mechanisms like local assemblies as vehicles for democratic participation and self-determination.

Rather than wait to take state power to transform society sometime in the future, this route highlights what social movements are doing to build in the present, a society of their dreams. Examples of this prefigurative politics include areas such as forms of economic production (worker cooperatives), social relations (actively challenging patriarchy in how we organise), political participation (how we make decisions and how we challenge hierarchy). This route is about building a new world in the shell of the old.

John Holloway, “Can we change the world without taking power?” (a debate between John Holloway and Alex Callinicos at the World Social Forum), International Socialist Journal, Issue 106, 5 April 2005.

The facilitators will introduce the activity and a make a short presentation on how to make effective summaries for plenary discussion.

We have 60 minutes for this presentation

The learning room is divided into 4 areas, each demarcating a specific freedom route. You will be divided into 4 reading groups. Each group will choose a representative to pick a ticket from a basket filled with different options about the different routes that we can take in our attempts to win freedom today.

After picking a ticket, read it out loud. This ticket will reveal your route. Your role is to locate your route in the learning room and study the route map (which is an article summarizing what your route is about).

Once you have done so, prepare a short summary using strips of card to share interesting details about your route with other participants who are travelling on a different route.

Refer to Worksheet 1 for further instructions on this task.

In your groups, you will have a resource person who will help you with how to approach the task.

Be ready to present your summaries. You will have between 10-minutes for the presentation of your route summary, which will be followed by critical feedback from the resource person that was allocated to your group. 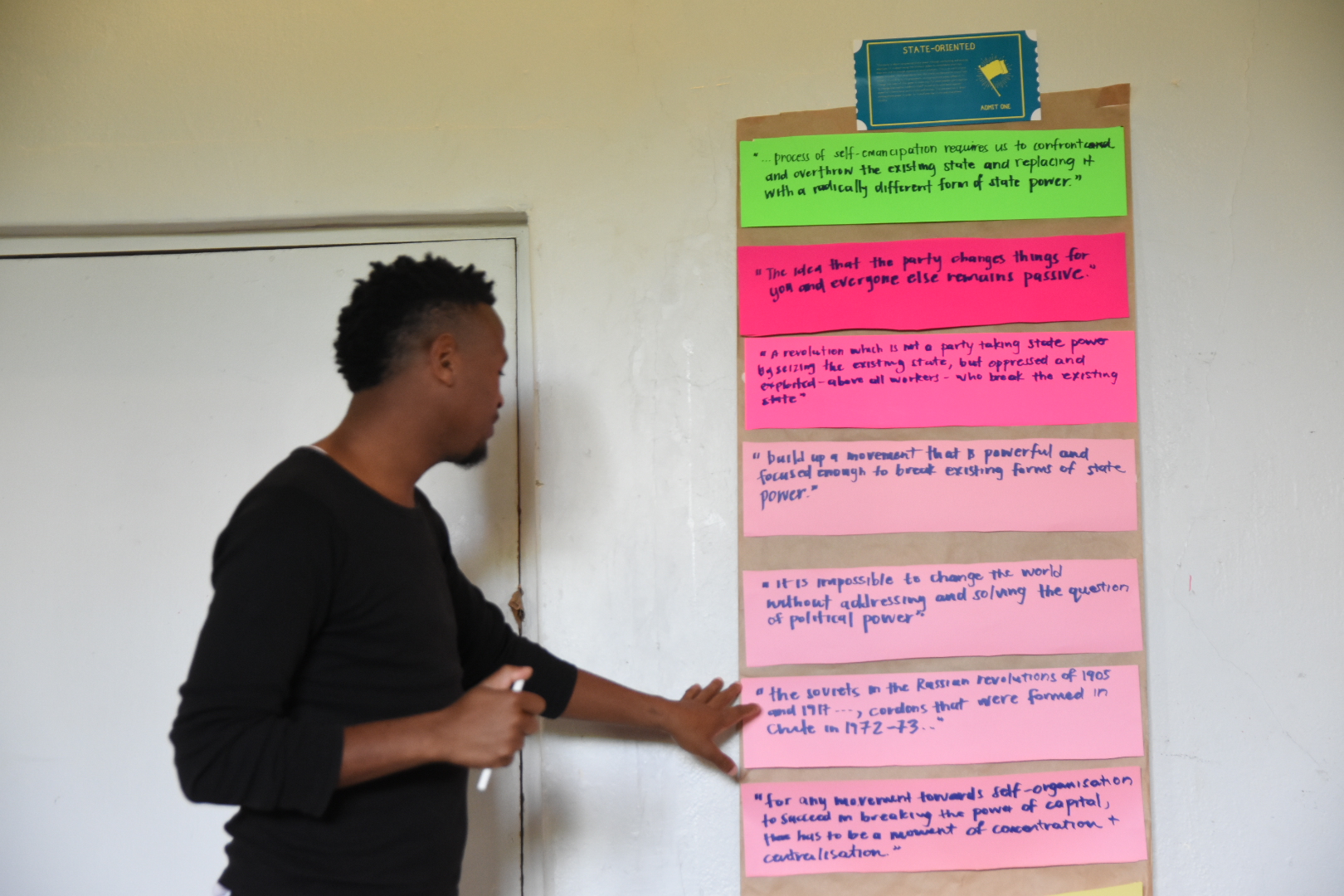 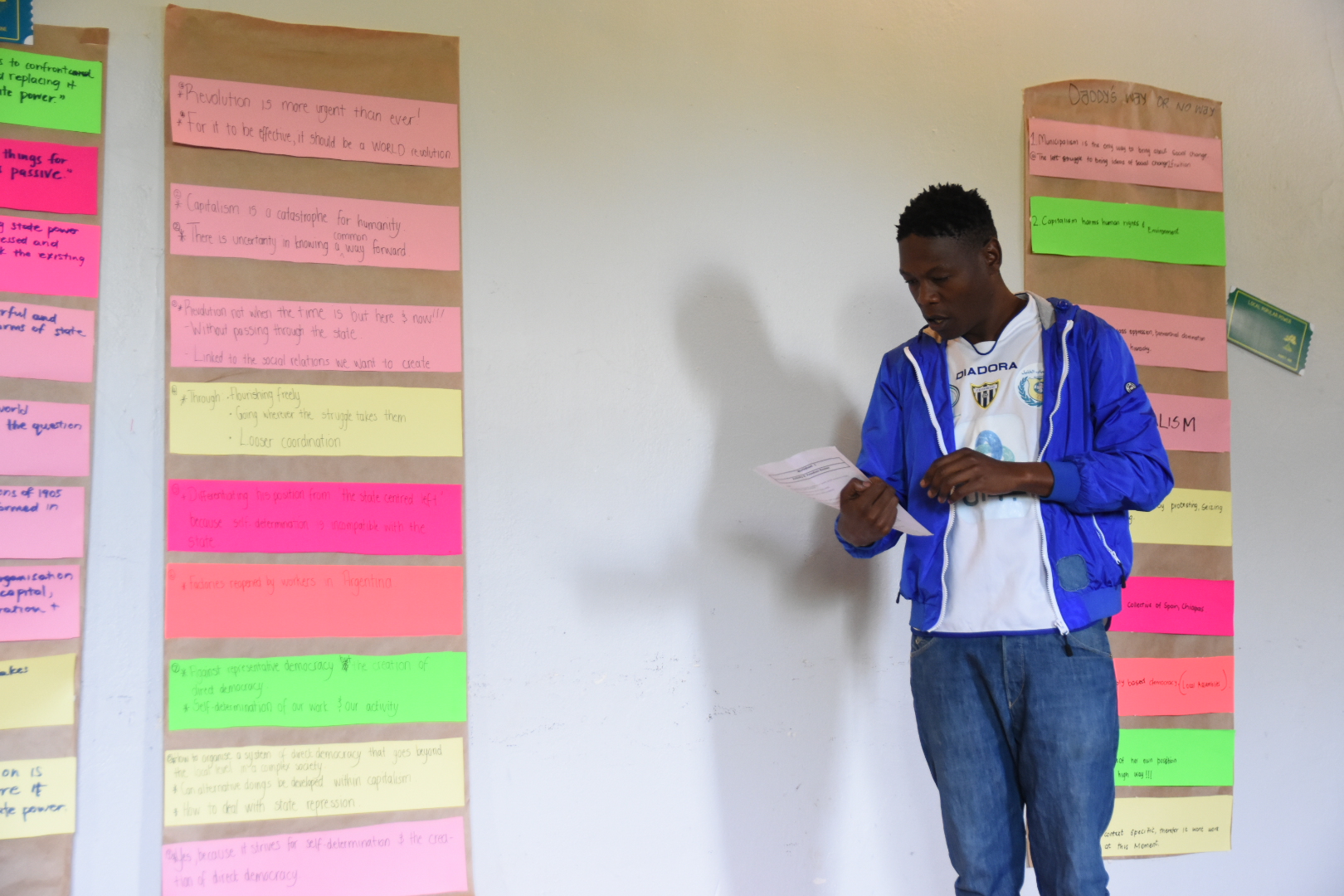 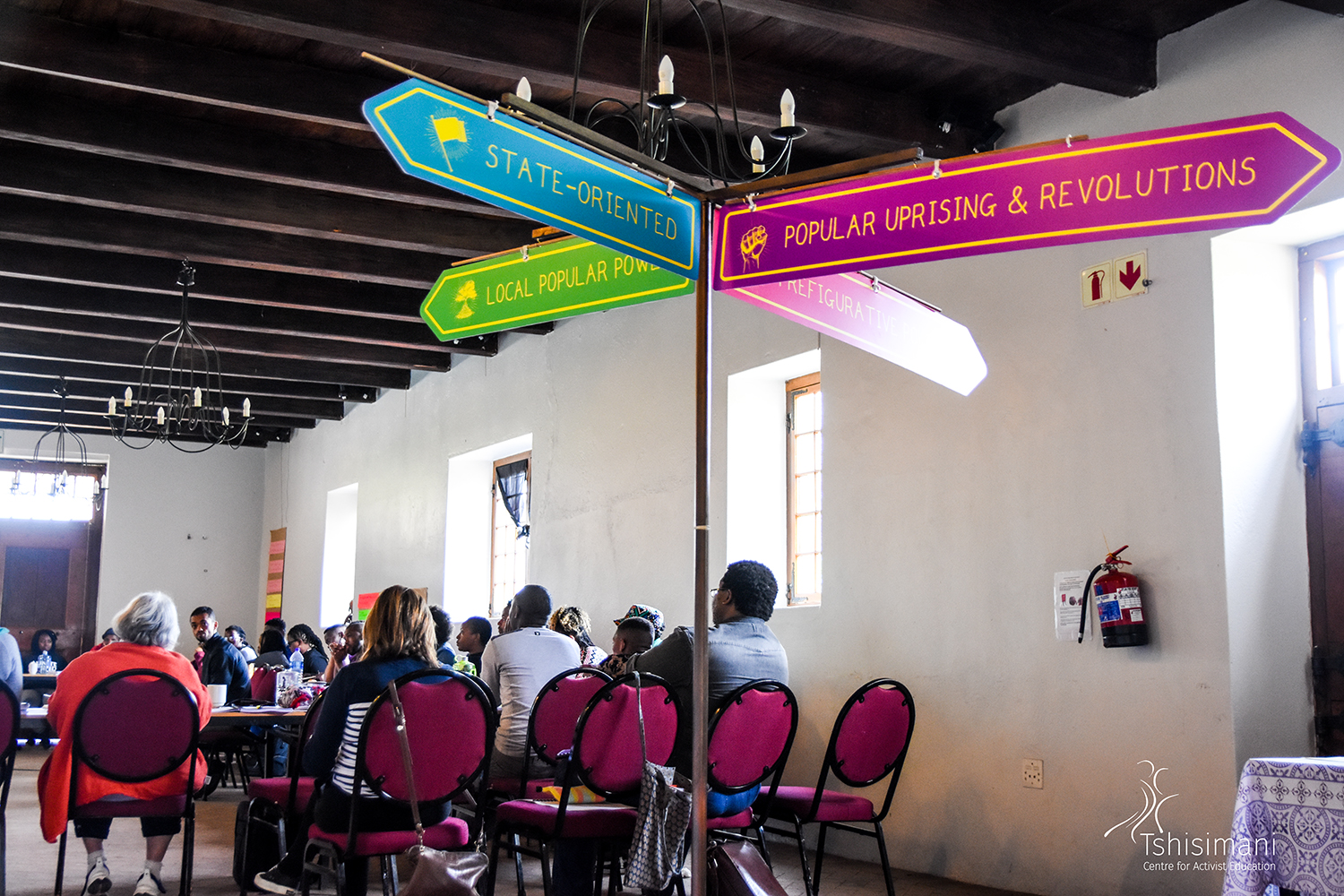